Ferozsons determined to combat Hepatitis till its elimination

The elimination of viral hepatitis has now been firmly put on the map. At the 69th World Health Assembly in Geneva, 194 governments adopted WHO’s Global Strategy on Viral Hepatitis, which includes a goal of eliminating hepatitis B and C in the next 13 years.

The community responded by launching NOhep, the first ever global movement to eliminate viral hepatitis by 2030. On World Hepatitis Day 2017, Ferozsons Laboratories Limited, a leader in hepatology built on this momentum to accelerate progress towards achieving the goal of elimination by 2030.

Ferozsons conducted a number of activities across Pakistan in major hospitals as well as within communities and health centres.

Some notable events included the WHD Seminar at Aga Khan University Hospital and Dr. Ziauddin Hospital Main Campus in Karachi with focus on understanding and combating Hepatitis B & C. In addition to this, a major event held by Mir Khalil-ur-Rahman Foundation (MKRF) was held in Lahore where leading hepatologists, public health specialists and senior government officials including ministers of health as well as secretary health of provinces joined the esteemed panel.

The company is engaged in a number of programs for screening, treatment and awareness of viral hepatitis working alongside several public and private organizations.

Ferozsons Laboratories Limited is the pioneer of launching the oral hepatitis C treatment in Pakistan through an Access Program by Gilead Sciences, Inc. USA when Pakistan became the only second country in the world to launch this treatment. Approximately 20 million according to various estimates suffer from Hepatitis B & C in Pakistan. 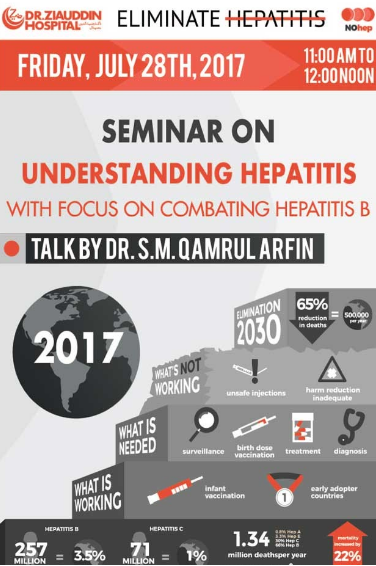