Breast cancer is a disease in which normal cells in the breast begin to change, grow without control, and no longer die, forming a mass of cells called a tumor
Breast cancer affects one in eight women during their lives. Breast cancer kills more women in Pakistan than any other cancer. No one knows why some women get breast cancer, but there are a number of risk factors. Risks that you cannot change include

Other risks include being overweight, using hormone replacement therapy, taking birth control pills, drinking alcohol, not having children or having first child after age 35 or having dense breasts.
Men can also develop breast cancer, but male breast cancer is rare, accounting for less than 1% of all breast cancer cases. Cancer begins when normal cells in the breast begin to change and grow uncontrollably, forming a mass called a tumor. A tumor can be benign (noncancerous) or malignant (cancerous, meaning it can spread to other parts of the body).

WHAT ARE THE PARTS OF THE BREAST?

The breast is mostly fatty tissue. It contains a network of lobes made up of tiny, tube-like structures called lobules that contain milk glands.

Tiny ducts connect the glands, lobules, and lobes, and carry the milk from the lobes to the nipple. 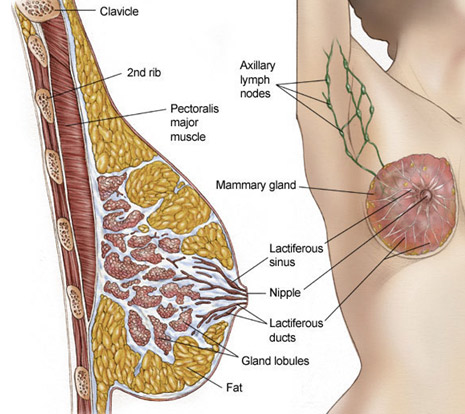 About 90% of all breast cancers originate in the ducts or lobes of the breast. Blood and lymph vessels run throughout the breast; blood nourishes the cells, and the lymph system drains bodily waste products. The lymph vessels connect to lymph nodes, which are tiny, bean-shaped organs that help fight infection.

Breast cancer spreads when breast cancer cells move to other sites in the body through the blood vessels and/or lymph vessels. This is called metastasis. A common site of spread is the regional lymph nodes. The lymph nodes can be axillary (located under the arm), cervical (located in the neck), or supraclavicular (located just above the collarbone). The most common sites of distant metastasis are the bones, lungs, and liver. Less commonly, breast cancer may spread to the brain. The cancer can also recur (come back after treatment) locally in the skin, in the same breast (if it was not removed as part of treatment), other tissues of the chest, or elsewhere in the body.

Currently, oncologists recommend that DCIS, which accounts for the majority of in situ breast cancers, be surgically removed to help prevent the cancer from becoming an invasive breast cancer and potentially spreading to other parts of the breast or the body. In addition to surgery, radiation therapy and hormonal therapy may be recommended for DCIS (see Treatment for more information).

LCIS is not considered cancer and is usually monitored by the doctor. LCIS is a risk factor for breast cancer.

Other, less common cancers of the breast include medullary, mucinous, tubular, metaplastic, and papillary breast cancer. Inflammatory breast cancer is a faster-growing type of cancer that accounts for about 1% to 5% of all breast cancers. It may be misdiagnosed as a breast infection because there is often swelling of the breast and redness of the breast skin. Paget’s disease is a type of cancer that can begin in the ducts of the nipple. The skin often appears scaly and may be itchy. While it is usually in situ, it can be associated with invasive cancer, as well.

WHAT ARE THE SYMPTOMS?
Women with breast cancer may experience breast abnormalities or symptoms, but many women do not show any of these findings at the time of diagnosis. Many times, breast signs or symptoms can be caused by a medical condition that is not cancer. If you are concerned about a sign or symptom, please talk with your doctor.

The signs and symptoms to look for include:

HOW IT IS DIAGNOSED?
The diagnosis of breast cancer usually begins when a woman or her doctor discovers a mass or abnormal calcification (tiny spot of calcium usually found on an x-ray) on a screening mammogram, or an abnormality in the woman’s breast by clinical examination or self-examination. Several tests may be done to confirm a diagnosis of breast cancer. Not every person will have all of these tests.

The following tests may be used to diagnose breast cancer:

ULTRASOUND: An ultrasound uses high-frequency sound waves to create an image of the breast tissue. An ultrasound may distinguish between a solid mass, which may be cancer, and a fluid-filled cyst, which is usually not cancer.

MRI: An MRI uses magnetic fields, not x-rays, to produce detailed images of the body. A contrast medium (a special dye) may be injected into a patient’s vein to create a clearer picture.

BIOPSY: A biopsy is the removal of a small amount of tissue for examination under a microscope. Other tests can suggest that cancer is present, but only a biopsy can make a definite diagnosis

Tests that look at the biology of the tumor are becoming more common to understand more about a woman’s breast cancer.

The doctor may also need to do blood tests to learn more about the cancer.

SERUM CHEMISTRY PANEL: This test is frequently done to evaluate blood and enzymes that can be abnormal if cancer has spread

BLOOD TUMOR MARKER TESTS: A serum tumor marker (also called a biomarker) is a substance found in a person's blood that can be associated with the presence of cancer. Tumor marker testing is not usually recommended for early-stage breast cancer, but these markers may be useful in the follow-up care of recurrent or metastatic disease

A chest x-ray, bone scan, computed tomography (CT or CAT) scan, positron emission tomography (PET) scan may be used to look for cancer that has spread from the

WHAT DOES STAGE MEAN?

The stage is a way of describing the cancer, such as where it is located, if or where it has spread, and if it is affecting the functions of other organs in the body. There are five stages for breast cancer: stage 0 (zero), which is non-invasive DCIS, and stages I through IV (one through four). Illustrations for these stages are available at www.cancer.net/breast.

HOW IS BREAST CANCER TREATED?

Not all breast cancer is the same. The biology of the breast cancer affects its behavior and treatment. The factors considered in a person’s treatment include the stage and grade (how different the cancer cells look from healthy cells) of the cancer; the tumor’s hormone receptor status (estrogen receptor [ER] and progesterone receptor [PR]) and human epidermal growth factor receptor-2 (HER2) status; the genetic description of the tumor, the presence of known mutations (changes) to breast cancer genes; and the woman’s age, general health, and menopausal status. For cancer that is not advanced, surgery to remove the tumor and nearby lymph nodes usually is the first treatment. Additional treatment may be given to lower the risk of the cancer returning. This includes radiation therapy, chemotherapy, targeted therapy, and/ or hormonal therapy. The treatment of cancer that has spread or come back after treatment depends on many factors and includes any of the therapies listed here. When making treatment decisions, women may also consider a clinical trial; talk with your doctor about all treatment options. The side effects of breast cancer treatment can often be prevented or managed with the help of your health care team.