The foundations of the Ferozsons business group were laid in 1894 by Maulvi Ferozuddin Khan, who founded the Ferozsons publishing house. From the outset, the group’s corporate vision involved playing a meaningful role in the education and health of the underprivileged population of the sub-continent.

Ferozsons Laboratories Limited was thus established in 1956 as one of the first Pharmaceutical manufacturing companies in Pakistan, and has now entered its seventh decade of serving the cause of health and well-being in Pakistan and a growing number of international markets.

In 1960, we became the first Pakistani pharmaceutical company to be listed on the Karachi Stock Exchange (KSE) Limited, and have a consistent track record of delivering on our financial objectives. The company is a multiple-time recipient of the KSE Top 25 Companies Award.

Mrs. Akhter Khalid Waheed assumed the role of Chairperson and Chief Executive of Ferozsons in 1992 following the untimely death of her husband Mr. Khalid Waheed, who had established the company from its infancy in 1956. During her tenure as CEO, Mrs. Waheed ably led the company and improved its sales and profitably consistently. In the period, the Company was awarded the Karachi Stock Exchange’s Top 25 Companies Award six times and developed alliances to expand the company’s role in healthcare.

Ferozsons set the standards for the strict adherence to Global Standards of Quality Control and Good Manufacturing Practice, achieving International acclaim and recognition soon after its incorporation.

The company remained a major supplier to the Federal Supply Services, Government of U.S.A, The British Crown Agents, the United Nations, and various international relief agencies besides exporting to many developed and developing countries including Australia, Iran, Hong Kong, Jordan, Saudi Arabia, Singapore, Sri Lanka, Sudan, Tanzania, Thailand, Turkey and the U.A.E. The company has a long and highly successful history of collaborations with various multinational companies in the past, including Boots Pharmaceuticals PLC of U.K, Chemie Grunenthal GmbH, Germany, Lakeside laboratories U.S.A, Orgasynth Laboratories of France and Proctor & Gamble, U.S.A.

Now the company has expanded its portfolio of medical solutions for critical diseases by forging alliances with a number of leading international partners including the Boston Scientific Inc., USA the world’s leading manufacturer of medical devices, a joint venture with the Bago Group of Argentina to establish BF Biosciences Limited, Pakistan’s first biotech pharmaceutical manufacturing company and Gilead Sciences, Inc. USA for their range of Hepatitis C and anti-viral therapies to name a few.

More recently Ferozsons signed an agreement with GE Healthcare of USA as channel partner for Value Segment of Ultrasound solutions. Apart from that, we maintain partnerships with BioGaia of Sweden for a line of probiotics as well as Performance Health, Inc. USA for the brand, Biofreeze pain relief products.

Below is history timeline of Ferozsons Laboratories Limited since its inception 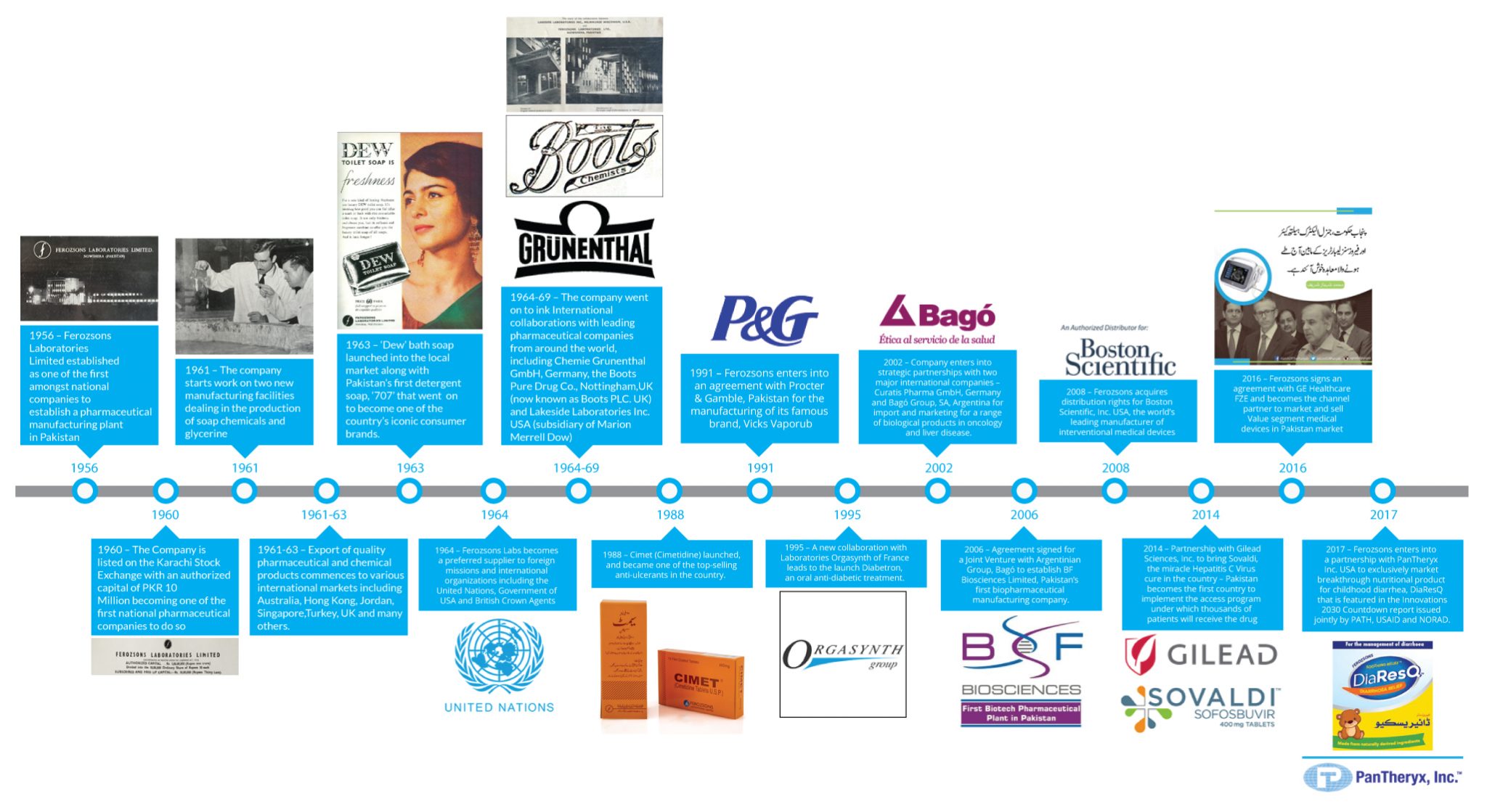